General prosecutor’s Office authorized the extradition of the Turkish citizen Hicri Mamas to his homeland, where he is accused of “impingement on unity and territorial integrity of the state”. Human Rights organization Human Constanta considers that this decision violates Belorussian legislation and international agreements of Belarus because in Turkey Hicri Mamas most likely will be subjected to tortures. In that way organization pleaded a petition to the UN Human Rights Committee for the interim measures.

Hicri Mamas claims that he didn’t commit any of such crimes on the Turkish territory and that he is prosecuted on the basis of political views because he took part in peaceful demonstrations and agitate the youth to join the Democratic Party of Peoples as he himself was its member for some time. Mamas asked for the international protection in the Republic of Belarus. However, on the 5 February 2020 Department of Citizenship and Migration of Belarus refused to provide international protection. On the 3 April Court of the Central district of Minsk left this decision in force.

«We consider that Hicri Mamas cannot be extradited to Turkey. There he is the most likely will be subjected to tortures. There is no legal provision that empowers Belarus to do that and we have already seen some good examples, when Belarus took into account its obligations and the situation of a person, for instance in the story of  Mehrdad Jamshidian. We hope that General prosecutor’s Office will reconsider this decision and give Hicri Mamas the opportunity to stay in the safe country” – Enira Bronitskaya is telling, who is the coordinator of human rights direction in Human Constanta that deals with the protection of rights of the foreign citizens and stateless persons.

Human Rights activists notice that the Convention against Torture and Other Cruel, Inhuman or Degrading Treatment or Punishment, to which Belarus is a state-party, states the following: “No State Party shall expel, return (“refouler”) or extradite a person to another State where there are substantial grounds for believing that he would be in danger of being subjected to torture”. Also article 17-1 of the Law of the Republic of Belarus “On the Legal Status of Foreign Citizens and Stateless Persons in the Republic of Belarus” provides that “Foreign citizens cannot be expelled from the Republic of Belarus to the foreign State in which they are threatened with torture”.

“Human Rights organization Human Constanta applied to the Human Rights Committee for the interim measures concerning Hicri’s case because there are serious grounds to assume that in case of extradition to Turkey he will be subjected to tortures. The real possibility of it is confirmed by the report of the Special Rapporteur on torture as well as by the 2019 year reports of human rights organizations such as Amnesty International and Human Rights watch in addition to other authoritative resources, –  Alena Chekhovich is telling, who is the lawyer of public reception for foreign citizens and stateless persons in Human Constanta. – Interim measures of the UN Human Rights Committee should pause the process of extradition until the case will be considered on merits by the Committee”.

On the 30 April 2020 Hicri also filed a complaint to the Minsk City Court against the decision of General prosecutor’s Office. We are waiting for the setting of trial date. Until that time authorities have no right to extradite Hicri from Belarus. 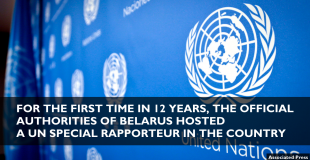