Nasta Lojka: arrested again, with no access to legal and medical assistance

Initially Nasta was detained on 6 September 2022 after a hearing in a co-called “Revolutionary action” case in Minsk city court, where ten political prisoners were sentenced to prison terms ranging from 5 to 17 years. It was not only Nasta who was detained that day – relatives of the accused, diplomats, attending the hearing, and legal counsels of the political prisoners.

Frunzenskiy district court heard a new case against Nasta Lojka on 22 September 2022. Nasta’s testimony was heard through video-conferencing. Her motion to be represented by a lawyer was not sustained by the judge. A law enforcement officer was the only witness in the case.

According to the administrative protocol of Nasta’s detention, law enforcement officers possessed “classified information”, which contained evidence of Nasta taking part in unauthorized public events. The law enforcement officers cited the need to receive additional information on her alleged participation in the protests to justify Nasta’s immediate detention after serving her first sentence and her transfer to Frunzenskiy district police department. On the way to the department, Nasta allegedly behaved “aggressively”, asked to stop the car, left the car, and started shouting, knocking folders from the officers’ hands. During the hearing, she did not agree to the substance of the administrative protocol. As a result, Nasta was once again sentenced to 15 days of administrative arrest for “petty hooliganism”.

In the course of the proceedings, Nasta indicated that she needed medical help, which she was not able to receive throughout her 15-day jail time. The human rights defender suspects that she might have caught bronchitis due to the cold temperatures in Akrestina detention center. She is also in need of advice from a therapist and gynecologist. The motions to defer the second sentence to consult medical specialists was not sustained by the court.

The detention center administration prevented Nasta’s communication with her lawyer, claiming that all meeting rooms were busy. Nasta is, therefore, cut from communications with the outside world. The inability to prepare her defence with the help of counsel of her own choosing effectively deprived Nasta of her right to defense – one of the key guarantees of the fair trial. State authorities may not refuse defendants their right to defense and any restriction of such right is unlawful.

According to Article 7 of the International Covenant on Civil and Political Rights (ICCPR), no one shall be subjected to torture or to cruel, inhuman or degrading treatment or punishment. According to Article 10 of the ICCPR, all persons deprived of their liberty shall be treated with humanity and with respect for the inherent dignity of the human person. Article 14 (3) of the ICCPR enshrines the right to defense by a counsel of choice. Article 25 of the Belarusian Constitution contains analogous provisions.

It is unlawful to limit the right of detainees to receive parcels. Such right is reflected in Article 18.7 of the Administrative Procedure Code. No decisions and normative acts may worsen the position of detainees as compared to those described in the Code. The internal procedure rules of the detention centers provide for a exhaustive list of grounds when parcels may be refused and returned to the sender. The reason cited by the administration of the Akrestina detention center is not on the list.

Such restriction is inhumane and disproportionate. It is a particularly harsh measure, given the drop of temperature in the fall and lack of central heating, leading to a situation when people cannot receive  warm clothes and vitamins. The lack of clothes to change, hygiene products, and means of individual protection results in a growing number of illnesses, including COVID-19. Despite the alleged logic of jail administration, the ban on receiving parcels can increase COVID-19 cases, not decrease them. Since the detention centers do not provide detainees with drinking water, such a ban leads to a complete inability to access clean drinking water.

We request the following: 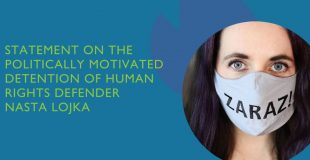 Statement of Belarusian human rights organization Human Constanta.
You have successfully subscribed to our newsletter