There is another legislative innovation in Belarus  –  the Law “On the Genocide of the Belarusian people” was adopted on 5 January 2022. The draft law was introduced by deputy Lilia Ananich “in order to preserve historical memory, strengthen national security and combat falsification of events and results of World War II.”

Human Constanta believes that the adoption of such a law would have negative consequences for Belarusian society, would monopolize the interpretation of the historical events by the Belarusian de facto authorities, and would limit the ability of citizens to express their opinions on the events of World War II.

The Law amended the Criminal Code of the Republic of Belarus by adding the following article:

Article 130-2. Denial of the genocide of the Belarusian people

1. The denial of the genocide of the Belarusian people, expressed in public speech, or in a printed or publicly displayed work, or in the mass media, or in information posted on the Internet, on other public telecommunications network, or on a dedicated telecommunications network, shall be punished with arrest, or restriction of liberty for up to five years, or deprivation of liberty for the same term.

2. The action provided for in paragraph 1 of this Article, committed by a person previously convicted of denying the genocide of the Belarusian people, or by an official using his official powers, – shall be punished with deprivation of liberty for a term of three to ten years.

The Law defines “Belarusian people” as:

Soviet citizens who lived on the territory of the Belarusian Soviet Socialist Republic from 1941 to 1951.

The Law defines “genocide” as:

atrocities committed by Nazi criminals and their accomplices, nationalist formations during the Great Patriotic War and the post-war period, aimed at the systematic physical destruction of the Belarusian people through murder and other actions recognized as genocide in accordance with the rules of international law.

In addition, the Law obliges the General Prosecutor’s Office:

to take additional measures to conduct a comprehensive, complete and objective investigation of the circumstances of the genocide of the Belarusian people, the identification of persons involved in its commission, and their criminal prosecution

The Law also obliges the Council of the Republic to take measures:

What is wrong with the Law?

In the present Convention, genocide means any of the following acts committed with intent to destroy, in whole or in part, a national, ethnical, racial or religious group, as such:

(a) Killing members of the group;

(b) Causing serious bodily or mental harm to members of the group;

(c) Deliberately inflicting on the group conditions of life calculated to bring about its physical destruction in whole or in part;

(d) Imposing measures intended to prevent births within the group;

(e) Forcibly transferring children of the group to another group.

Also Article 9 of the Convention provides that:

Disputes between the Contracting Parties relating to the interpretation, application or fulfilment of the present Convention, including those relating to the responsibility of a State for genocide or for any of the other acts enumerated in Article III, shall be submitted to the International Court of Justice at the request of any of the parties to the dispute.

Therefore, the International Court of Justice is in a better position to establish whether genocide occured than by the General Prosecutor’s Office of Belarus.

The World War II claimed many lives on the territory of present-day Belarus and other territories of the former Soviet Union. Preserving the memory of the tragedy of the war and the possibility of dialogue about the perpetrators and victims are important elements in building an educated and responsible society, especially when the events of Russia’s full-scale war in Ukraine increasingly remind us of the recurrence of the horrors of the World War II. There is a view of human rights organizations that the denial of history is often a direct attack on the human dignity of the victims and those associated with them. However, the Law “On the Genocide of the Belarusian People” is not a tool that promotes the goal of justice and dignity of the victims, but rather an additional repressive instrument.

Article 19(3) of the 1966 International Covenant on Civil and Political Rights, which enshrines the right to freedom of expression, also establishes a three-step test, compliance with which is necessary for lawful restrictions on this freedom. The test provides that restrictions must be prescribed by law, be necessary and proportionate in a democratic society, and pursue a legitimate aim (respect for the rights of others, protection of national security, public order, public health or morals).

The broad prohibition of “denial of the genocide of the Belarusian people” gives the Belarusian authorities unlimited freedom in interpreting which opinions about World War II will henceforth be considered criminal. Can, for example, the behavior of the Soviet authorities during the war be subject to public criticism? How will the Law affect discussions of Stalinist repression or examples of anti-semitism in the USSR? The vagueness of the wording in the Law does not allow citizens, whose actions it is intended to regulate, to understand the limits of permissible and impermissible behavior, because, according to the legislator, virtually any statement can be outlawed.

Moreover, the punishment for the “denial of the genocide of the Belarusian people” under the Law is always associated with restriction or deprivation of liberty and is disproportionate to the aims declared by the legislator. It does not take into account that certain interpretations of history can be the result of personal mistakes and isolation of “violators” in places of detention will hardly contribute to the education of society on historical issues.

International actors systematically condemn the adoption of laws that monopolize interpretations of historical events. The Human Rights Committee, as the principal interpretive body of the International Covenant on Civil and Political Rights, in its General Comment 34 (paragraph 49) notes:

“Laws that penalize the expression of opinions about historical facts are incompatible with the obligations that the Covenant imposes on States parties in relation to the respect for freedom of opinion and expression. The Covenant does not permit general prohibition of expressions of an erroneous opinion or an incorrect interpretation of past events. Restrictions on the right of freedom of opinion should never be imposed and, with regard to freedom of expression they should not go beyond what is permitted in paragraph 3 or required under Article 20.”

A similar view is shared by the Special Rapporteur on the Freedom of Opinion and Expression:

“By demanding that writers, journalists, and citizens give only a version of events that is approved by the Government, States are enabled to subjugate freedom of expression to official versions of events.”

“We acknowledge that the denial of historical events is often a way of spreading hatred against the survivors and victims of the crimes. While such denials raise concerns of intolerance and may legitimately be considered “hate speech,” prohibition on such expression should be limited to only those acts that reach the threshold of incitement to violence, hostility, or discrimination. The protection of individual rights, as opposed to the defence of “historical truth claims,” must be clearly distinguished as the basis for any limitation on the right to freedom of expression.”

Human Constanta agrees with the prevailing position of the international community on the danger of laws that monopolize historical memory, and believes that restrictions on freedom of speech associated with criminal liability for the “denial of the genocide of the Belarusian people” are not lawful, necessary, or proportionate. The practice of applying the Law in an authoritarian Belarusian state is unpredictable and may increase the risks of politically motivated persecution and arbitrary restrictions on the right to freedom of expression. 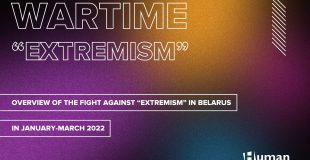 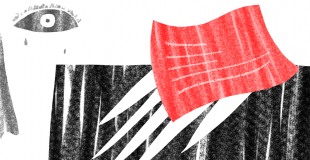 Analysis of the proposed amendments to the anti-extremist legislation (review from the perspective of international human rights obligations of Belarus).
You have successfully subscribed to our newsletter