On February 11, 2018, a terrible incident occurred in Kobrin – a man attacked a young couple of Roma origin and inflicted many stab wounds. The pregnant woman eventually died, her husband survived. The person who committed the crime was arrested. The court considered the question of whether this crime was committed on the grounds of hatred and prejudice.

Hate crimes are one of the strategic topics in our work, so we monitored the trial. Volunteers of the human rights organization Human Constanta monitored court hearings both in the Brest Regional Court, and when appealing the verdict in the Supreme Court. It was important for us to find out how the motive of the crime is investigated, whether there is, in fact, prejudice and how a legal assessment is given. We also wanted to understand how much a clear legal signal is given to the public at the court session about the inadmissibility of hate crimes. As a result of monitoring, we made recommendations to the courts and investigative bodies on improving legislation. See the detailed report below:

Part of our team visited this process and share their impressions:

I thought a lot – why do crimes happen? Often people kill because of revenge, jealousy, other personal motives. And what if it happens only because of your belonging to a national or religious minority, to another social group? Will people from this group be able to walk safely in the streets?

We, as human rights activists, consider that it is important to pay attention to crimes based on the prejudice motive, to look for ways to adequately respond to them. Actions that happened in Kobrin on February 11, 2018 should not be repeated. We see that the reason for the criminal actions was  seeing  Roma as “social parasites”. Although in fact the defendantwas guided by the neo-Nazi ideology and remained committed to these ideas during the court hearing. It was important for us to look at the reaction of the investigating authorities and the courts to such crimes. My personal fears are related to the fact that the police often treat Roma badly. Human rights activists talk about the practice of profiling on a national basis in Belarus. In this case, it is necessary to note that victims haven’t complained about the investigators, but they have noted a sympathetic attitude.

Our main conclusions are that the court paid a lot of attention to the motive of the crime, but there is a lack of the methodological approaches that were entrenched in international human rights standards for such crimes. If approaches proposed by the Office for Democratic Institutions and Human Rights (OSCE) had been used, the arguments of the court would be more convincing, a signal to the society would be clearer, and the educational function of criminal prosecution would look more effective.

For me, evidence of the motive for the crime was important in this case.. I want to note a positive point that the prosecutor asked for an additional expertise on article 130 (inciting hostility). However, it would be desirable if the expertise was initially addressed to those who have the proper competence in a particular issue.

Moreover, I would also pay attention to the “auditory control”: after the defendant had been arrested, there was a sound recording of the conversations with cellmates in a cell of the temporary detention facility. for me, it’s a big question to what degree these materials are admissible for use as the evidence. According to the Camden Principles and the Rabat Plan, it is necessary to note that the attention was paid only to the moment of possible authorship of the materials on the part of the defendant, i.e. there is no comprehensive consideration of approaches.

During the monitoring of the court hearing the most interesting thing for me was to look at the reaction of the defendant and victims. The fact that someone can take a person’s life because of one criterion didn’t fit in my head. During one of the court hearings, a victim asked: “Why did you do this? For what have you done it to us, we haven’t done anything bad to you, we haven’t even quarreled. I do not understand…”. I watched the defendant intently. His face remained calm, I think he didn’t even blink. I still find it hard to believe that this man does not repent. He had the opportunity to apologize (at least), but he did not do that either.

Throughout all the hearings, I was simply amazed by this cold-bloodedness and fortitude of the defendant. It seems to me that he did not even feel shame. During the hearing, when the evidence was unpacked, the defendant asked not to liquidatehis sneakers with traces of the victim’s blood, saying: “Good sneakers will be useful.”

In my mind there were constantly flashing hundreds of questions. How is hatred born? Why do some people decide that they can “punish” others? Why is this payed so little attention to? Is there no fear in society?

After all, in fact, if someone suddenly does not like my hair color, then you can kill me too? For me, logics is exactly the same. And I’m scared. After all, there are many such stories – and these are tragedies. The tragediesthat few people talk about, tragedies, behind which there are lives of people, that are just as valuable as mine, and my neighbor, and a person passing by on the street. 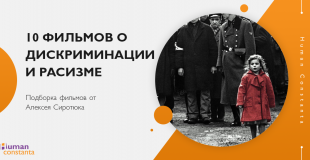 For a number of years now, from 9 November (the anniversary of Kristallnacht, the symbol of the beginning of the tragedy of the Holocaust) to 16 November (International Day of Tolerance), the Human Constanta team, together with other human rights and non-profit organisations, has been running an Awareness Week against Discrimination and Hate.
You have successfully subscribed to our newsletter