Human Constanta > Areas of work > What is digital authoritarianism and how it limits Internet freedoms?

What is digital authoritarianism and how it limits Internet freedoms?

The Internet began as a space for freedom. Gradually, the states began to restrict it more and more. Digital authoritarianism is a fairly new term that has been picked up by many modern researchers. It includes a range of different restrictions on digital rights and is a way of exerting authoritarian control of cyberspace.
A prime example of a country where digital authoritarianism flourishes is China. The Great Firewall of China has been successfully filtering the contents of the Chinese Internet for nearly 20 years. The firewall restricts access to a number of foreign sites in China, such as Facebook. Also, Chinese sites cannot refer to publications and news from foreign portals without special permission. Web pages are filtered by keywords related to national security and a blacklist of sites. The “Golden Shield,” as the
Chinese firewall is also called, is one of the 12 main projects of China for the development of e-government in the country. But under the guise of a public good, strict digital control is being introduced into almost all spheres of life of Chinese citizens.

Looking at China’s successful experience, other countries with autocracy-like state regimes are attempting to control the Internet. Strong tendencies in the restriction of freedom on the Internet can be
traced in Belarus after the 2020 protests and in Russia, especially with the outbreak of war in Ukraine in February 2022. In 2021, Freedom House published the Freedom on the Net report,
which ranks the freedom of the Internet in the world. The authors note that the level of online freedom in the world has been falling for the 11th year in a row. The biggest deterioration of the situation in 2021 was noted in Myanmar, Belarus, and Uganda.

The easiest way for the state to restrict the freedom of users on the network is to block websites or individual content. Special laws are adopted for this purpose. Most often they are positioned as measures taken against fakes and the spread of false information. Yet, in an
authoritarian state, all information that is undesirable to the current
government falls within the ambit of such a law. Another example is the new law in Russia, which provides for fines of up to one and a half million rubles or imprisonment for up to 15 years for
spreading fakes about the actions of the armed forces of the Russian Federation on the territory of Ukraine.

In Belarus, in 2021, after large-scale peaceful protests and a large wave of online solidarity against cruelty and violence, new amendments to the Law on Countering Extremism were adopted. Now, extremism is understood not only as actions, but as ideology and practice, and for an
“extremist” comment on a social network, people face real prison terms. In both Belarus and Russia, responsibility for calls for sanctions is now enshrined at the legislative level.

The most striking example of online surveillance is surveillance using cameras. There are 176 million cameras installed in China. With the help of facial recognition programs, the police can find any person or track their route in seconds. This functionality is useful when you need to find a criminal, but the same system can also be used to suppress protests. On the territory of Tibet, where there are still protests about independence from China, all mobile phone and Internet users must be registered under their real names. About a hundred Tibetans committed an act of self-immolation during protests – yet, despite this, such a system has been fully implemented in Tibet since 2013.

In 2020, Synesis company came under EU sanctions. It provided the security forces of Belarus with the Kipod facial recognition system, which was supposedly used to identify participants in peaceful protests against electoral fraud. The EU considered that the use of this system by the security forces made the company responsible for the large-scale repressions of the Belarusian authorities against civil society and the Belarusian opposition.

Another example of online surveillance is the collection of personal data. For example, registration on the websites of public services is mandatory. People’s data is collected, but no one says where and how it will be used in the future.

In 2020, Russian hackers attacked more than 200 organizations related to the US presidential election. Cyberattacks occur not only at the global level, but also at the local level. If the authorities see that someone has become too active, they can send hackers and bring down the site or steal the account.

Another example is the Pegasus program, developed by the Israeli company NSO Group, which produces software for cyber-surveillance. If Pegasus is embedded in a person’s phone, then you can not only read all personal information, but also control this device remotely. The
technology is not sold to individuals or firms but offered only to states. Good investment for a digital autocrat.

In the Russian context, the example of a “troll factory” immediately comes to mind. This is an Internet research agency headquartered in St. Petersburg, which is engaged in the dissemination of disinformation and the formation of alternative public opinion. Agency employees create fake accounts in major social networks and online publications, and then flood the digital space with their own meanings, mix up the agenda, and promote fakes.

In 2018, U.S. Special Counsel Robert Mueller filed a 37-page document detailing evidence of the “troll factory’s” interference with the American will process. The trolls stole the personal data of Americans, created fake characters and communities, portraying real activists, invested heavily in the promotion of these communities in social networks and, with their help, organized street actions in support of Trump and against Hillary Clinton.

How to protect yourself from digital authoritarianism

As much as rulers aspire to become digital dictators, not all states are so powerful and savvy in technology. Often, there are few truly talented specialists working in the IT sphere, many blockages can be bypassed, and many risks of restricting one’s own rights can be minimized. Therefore, in many cases, a “basic first aid kit” of recommendations against digital authoritarianism can be really effective.

Use a VPN. This technology allows you to maintain confidentiality and appear as if you are in a different domain zone. That is, you can access sites even if they are blocked in some country. For example, with a
connected VPN in China, you can browse Facebook.

Telegram does not need to be tied to the phone number. Because in an authoritarian state, the phone can easily be in the hands of a policeman, and he can find out the password and log in to the messenger. It is even easier to make a duplicate of SIM-card and get access to the phone and all the information in it.

Install licensed software and antiviruses, updating them on time. Think of complex and different passwords. It is recommended to store them in a password manager.

If you look at the level above your own security, then the threads lead to corporations. For example, during peaceful protests against electoral fraud in Belarus in 2020, the authorities turned off the Internet throughout the country for several days. This was done thanks to the
purchase of equipment from the American company Sandvine. The Bloomberg edition conducted an investigation in August 2020 and said that Sandvine equipment was installed in several places in Minsk.
Through it, the National Traffic Exchange Centre manages Internet activity in the country and can block 40% of all incoming and outgoing Internet traffic, blacklisting up to 150 million URLs. After this information became available to the public, Sandvine refused to supply its technologies to Belarus in the future.

Thus, technology that could have served a good purpose is being used to establish digital autocracy and limit the dissemination of information. You can protect yourself if the public pays attention to such actions of private companies and draws attention to these actions.

You can try to influence the spread of digital authoritarianism through advocacy at the state level. Having reached an international consensus, one can try to put pressure on autocrats with the use of sanctions.

You can make some noise in international instances. For example, the European Court of Human Rights considers cases related to wiretapping. The decision of the international instance allows once again
to loudly declare that digital surveillance and the use of other control measures disproportionately restrict digital rights.

Authoritarian powers are often clumsy and short-sighted in their digital repressions. They rarely come up with something themselves, but act in a reaction mode, sometimes looking at each other. It is important to monitor the development of digital authoritarianism and counter it with the values of the free internet and digital resistance. 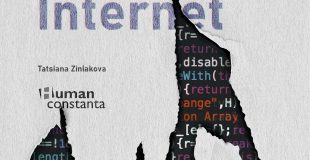