In March 2017 in Belarus there were manifestations against the tax on parasitism, as a result of which a huge number of people, including foreigners, were detained.
Since Human Constanta sets one of its goals precisely the protection of the rights of foreign citizens, we analyzed the cases of detention and talked with the detainees.

Unfortunately, we found that in most cases the rights of foreigners were flagrantly violated, the detainees were not explained their rights and were not given an opportunity to contact lawyers. Conditions of detention were unsatisfactory, law enforcement officials did not facilitate contacts with consulates and embassies, whose citizens were detained and put under administrative arrest.

We described in detail the cases we known in the analytical note and added our recommendations and contacts, which can be useful to foreigners visiting Belarus.

Read a report in PDF 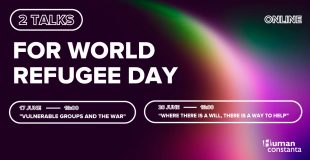 We invite you to two online talks to discuss the challenges for refugees from Ukraine and other countries. The talks will be held by international experts on the topic.
You have successfully subscribed to our newsletter