Since 2016, we have been monitoring the situation on the Belarusian-Polish border in Brest. Transit refugees come there from different regions of Russia, as well as from other countries. They try to cross the Terespol border checkpoint and apply for asylum in Poland. This article provides current data concerning the situation with transit refugees on the Belarusian-Polish border for the period from January 1 to March 31, 2020.

In this report, we focus on the main figures that characterize the dynamics of the situation at the border, namely:

667 attempts of transit refugees who applied for international protection in Poland were recorded during the monitoring of the railway station in Brest and a questioning of people within the stated period. Only in 73 cases, people were allowed to enter Poland and the authorities started to process applications for refugee status.

We recorded 3 days when not a single person was allowed to cross the border.
During the entire period, there were an average of 17-20 families (about 100 people) in the city.

In early January, the number of families who were forced to flee Tajikistan increased among applicants for international protection. It was caused by reports of mass detentions of university students and teachers, a number of civil servants, as well as public activists. These events forced at least 4 families and 8 individuals from Tajikistan to leave the country and request international protection in Poland (in January 2020).

Border Closures due to the Pandemic

The most significant event that has radically changed the state of transit refugees in Brest was the decision of the Polish authorities to close the border with Belarus due to the coronavirus pandemic. However, it should be noted that Polish representatives stopped accepting applications for international protection on March 12, 2020, although the formal closure of the border should have started on March 15.

Starting from March 15, 2020, sales of train tickets to Terespol station stopped. Thus, the refugees were deprived of the opportunity to apply for international protection in Poland. Crossing the border by train is the only means where the Polish side complies at least with the minimum formal requirements for initiating the refugee status application procedure, that is determines the purpose for which the applicant has arrived; conducts an interview to clarify the circumstances that forced the refugees to seek protection in Poland. Pedestrian or automobile border checkpoints to Terespol do not provide even those minimum opportunities that exist at the railway checkpoint.

Since January 2020, the behavior of the Brest migration services towards refugees has changed. In particular, migration officials started to visit people at their place of actual residence or registration more often. Some were visited within several days, being put under psychological pressure.

Migration officials told them they had no complaints and this is just a part of their job. It should be kept in mind that many refugees have suffered from harassment by law enforcement agencies in their states of citizenship, and such attention has a negative impact on their psychological state.

The migration services again started to shorten the period of stay of foreign citizens. Law enforcement officials began to apply this practice to citizens of Tajikistan, Kyrgyzstan and Kazakhstan. When “meeting” refugees, migration officers seize their passports and invite them to come to the Migration Department later. However, this situation has negative consequences. Firstly, foreign citizens stay in Belarus without their identity documents (which is sanctioned under the

Code of Administrative Offences). Secondly, when a refugee will come to the authorities to explain the circumstances of his or her stay in Belarus, his or her passport will have the period of stay reduction stamp, which may even be the obligation to leave the country within 3 days. People are not even given the opportunity to defend themselves, either verbally or in writing. It is also complicated by the fact that since March 30, 2020, the Russian Federation has also closed its border with the Republic of Belarus, which makes it difficult for the refugees to return.

In conclusion, we would like to stress that closing borders in order to protect the population from the pandemic does not cancel the existence of various international and local regulations aimed at protection of human rights and freedoms. In such critical circumstances, the main characteristic of transit refugees in Brest — their invisibility — is even more vivid. They stay invisible both for the local community with their local problems, and for the international community, puzzled by the problem of fighting the virus. It is in our power to make sure that people are not left alone with their problems. 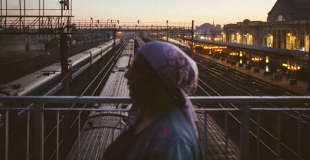 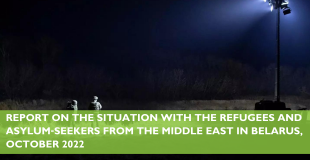