Human Constanta > News > What does international humanitarian law say during the war?

What does international humanitarian law say during the war?

During an armed conflict, human rights continue to apply, although some of them may be limited. Yet, the international humanitarian law (IHL), which is also called the “law of war,” starts to apply. Its key purpose is to minimize the consequences of war by making the belligerents follows certain rules of conduct.

IHL regulates the choice of means and methods of warfare, protects those who do not participate or have stopped participating in hostilities. It also protects combatants – persons who use force during an armed conflict. Violations of international humanitarian law are considered war crimes.

On February 24, 2022, Russia started a war against Ukraine. Any war brings destruction, suffering, and huge human losses. The rules of international law try to limit the brutality of war.

What protection does IHL provide?

The rules of warfare have always existed, countries signed treaties with each other. The rules of war were first documented in an international format in 1864 in the first Geneva Convention. Approaches to the conduct of military operations have changed and, following this, legal norms have changed, which is reflected in subsequent Conventions and Protocols to them. The Geneva Convention as a singular term is understood to be the 1949 agreements concluded after World War II, which clarified the terms of two 1929 treaties and added three additional protocols.

·   Allows an attack only on military facilities or on objects that are used for military purposes;

·   Provides protection to the disabled, wounded and sick, shipwrecked persons during military operations at sea, prisoners of war, persons not taking part in hostilities (civilians);

·   Obliges to separate those who are directly involved in the fighting and the civilian population. Attack on civilians are prohibited;

·   Prohibits the use of weapons (restricts the use of such weapons), causing suffering to people or leading to unjustified victims;

·   Prescribes mandatory care for the wounded, protection for medical personnel;

·   Ensures respect for the human dignity of prisoners of war and injured citizens. The rules prescribe the permission of mandatory access to these people by delegates of the International Committee of the Red Cross.

If the prescribed norms are violated

From the first day of the war, Russia declared that it was firing only at military facilities on the territory of Ukraine. But numerous videos of missiles hitting administrative buildings, schools and kindergartens, hospitals and residential buildings in various Ukrainian cities confirm the IHL violations. Unfortunately, there are civilian casualties, including among children. Active documentation of all facts of violation of the law during hostilities is being conducted, so that after the end of the conflict it would be possible to bring the guilty party to international responsibility.

The Prosecutor of the International Criminal Court asks everyone who has documentary evidence of possible Russian war crimes in Ukraine to send these materials by e-mail [email protected] . These may include the killing of civilians, missile-bombing and artillery strikes on hospitals, schools, residential buildings and other civilian objects. You can write in any language.

Russia has ratified the Geneva Conventions, which means that the country and its citizens can be held accountable for violating the norms enshrined therein.

Shall we meet in Hague or not?

The International Criminal Court (ICC) operates in Hague. Russia and Ukraine are not parties to the Rome Statute, the document that governs the activities of the court. The countries have signed it, but have not ratified it.

The ICC can investigate international crimes, assess them, investigate and adjudicate disputes. It hears cases on war crimes, crimes against humanity and genocide, as well as on the crime of aggression.

In early March 2022, 38 states that have ratified the Rome Statute appealed to the ICC Chief Prosecutor Karin Khan with a request to launch an investigation into the military conflict in Ukraine. On February 28, 2022, Lithuania did this separately. The prosecutor has already launched an official investigation.

On March 21, the head of European diplomacy, Josep Borrel, said that Russia was committing numerous war crimes. “These are exactly the words we need to say. What is happening in Mariupol is large-scale war crimes. They destroy everything there, bomb, kill everyone indiscriminately. It’s terrifying. We must condemn what is happening in the most severe way. This is a crime, war criminals are operating in Mariupol. The city is completely destroyed, people continue to die.”

The procedures of the UN system can be applied to bring individuals to international responsibility for war crimes. War crimes committed in the context of the conflict in Yugoslavia and Rwanda were dealt with by the relevant ad hoc tribunals.

At a seminar within the framework of the week of educational actions “Peace. Equality. Human Rights”  Professor of the University of Liverpool (Great Britain) Konstantin Degtyarev shared his vision of whether international tribunals can help in some way during the confrontations. He believes that the law in the situation we are witnessing can do very little.

Universal jurisdiction also works in the context of war crimes, genocide, crimes against humanity. If one of the politicians making decisions related to the conflict, or from the military command, finds himself on the territory of a country that, within the framework of universal jurisdiction, decides to try for a crime committed, this may work. But a lot depends on the legislation of each country.

By the way, the last surviving prosecutor in the Nuremberg tribunal, Prosecutor Benjamin Ferenc, who is now 101 years old, said in a recent interview with the Mirror that the Russian president could be convicted of war crimes in Ukraine. Benjamin Ferenc has little doubt that crimes are committed during military operations, because cluster munitions of indiscriminate action are used, which fly into the civilian population.

Even if Ukraine does not have the opportunity and resources, and Russia does not want to participate in the process, this does not mean that all people who have committed war crimes will be able to evade responsibility. The possibilities of using international mechanisms will appear a little later, because now there is an active part of the war and the stage of collecting evidence.

“The discourse on human rights usually arises after large-scale catastrophes, global negative events, – says Professor Konstantin Degtyarev. – And the war in Ukraine is now such a catastrophic crisis that can shake up the international order. This makes it possible to create new effective mechanisms. For example, the war in Yugoslavia and the genocide in Rwanda gave impetus to the creation of international criminal law. Time will tell what conclusion the world will make from the war in Ukraine.” 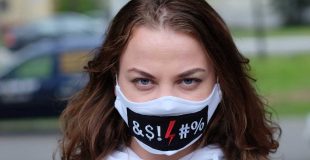 At the time of the epidemic, it is especially important to take fundamental human rights seriously. To remind everybody about this, we launched the performance #AgainstVirusForRights with Belarusian artists who designed protective mask in their own way reflecting about human rights. Digital Freedoms Lab

ACCESS TO INFORMATION DURING THE COVID-19 PANDEMIC IN BELARUS

In Belarus, during the COVID-19 pandemic, the right of citizens to access information was constantly violated.